Warning: ini_set(): A session is active. You cannot change the session module's ini settings at this time in /home/tgf/public_html/settings.php on line 13 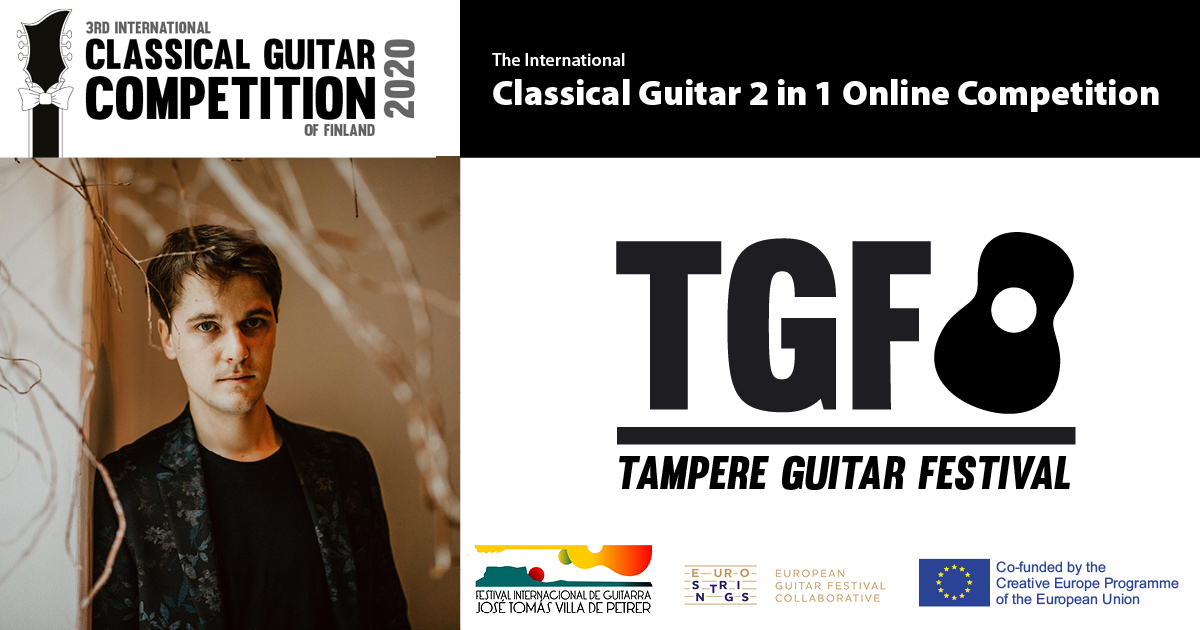 This year, the Classical Guitar Competition of Finland, organised by Tampere Guitar Festival, was held online in collaboration with Guitar Competition José Tomás – Villa de Petrer from Spain. The 2 in 1 Online Competition started in July 2020 and the Finals were held this November. From all the performances of Round 1 (over 60 applicants) and then from Semifinals (20 in both competitions), two independent Juries selected four finalists to both competitions. Surprisingly, three of the Finalists were the same for both Finland and Spain.

The winner of the Finnish competition is Marcin Kuzniar. He received a cash prize of 2 000 euros, among other prizes. Second place went to Katarzyna Smolarek from Poland. Third place went to Jonas Egholm from Denmark. EuroStrings Artist 2020 from the competition of Finland is Alvaro Miranda from Costa Rica, since all the other finalists have already been selected as EuroStrings Artists in other European guitar competitions. Still Kuzniar may attend to the next EuroStrings Guitar Copmpeitition. The possible recording contract with Finnish label Alba Records will be decided later this week.

Seppo Siirala, the head of the Finnish jury, comments the competition like this: “This year’s competition provided different challenges for the competitors, because it had to be organized online due to the COVID-19 situation. The finalists dealt with the situation very professionally and came up with well-prepared performances both technically and artistically. The winner of the competition, Marcin Kuzniar, showed deep musicality throughout the competition, and convinced the jury with his professional approach and mature interpretations.”

Marcin Kuzniar from Poland graduated in 2017 from the Academy of Music in Katowice. In 2020 he finished his postgraduate studies at the University of Music and Performing Arts, Graz, Austria. He has received over 40 prizes at international guitar competitions in Europe and the USA, and performed on several continents. In 2018 Marcin Kuzniar published his debut album called “Song Without Words” with music from the 19th and 20th century.

Kuziar after the competition: “I entered the International Classical Guitar 2 in 1 Online Competition, because it seemed like a very interesting and exciting experiment. The fact that two independent juries would judge the performances simultaneously could bring valuable observations about the different ways my interpretations are perceived. Another fresh and unique element of this competition was the timetable. While the consecutive stages were a few weeks apart, I could have taken much more risks while constructing my repertoire. It was really stimulating and exciting experience! I personally know and admire a lot of other competitors so I am honoured that the Finnish jury decided to give the 1st prize to me. It was a long and demanding process and I feel like it has made me a slightly better musician than I was when it all started. Big thanks to both organising crews for creating this unique and perfectly executed events!”

Listen to the Finals and the results

New audiences from all over the world

Please give feedback for the virtual events